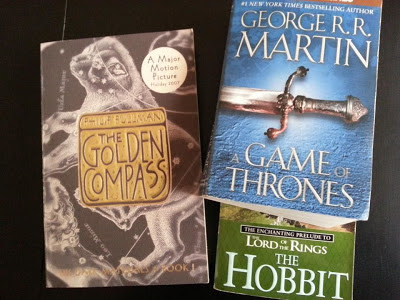 We've got a few more great finds for Fantasy February, including:

Thrones and Compass are brand new additions, while The Hobbit was previously featured in our Books to Screen series. All three are the first books their respective sagas. So hurry and check out these epic adventures while they're in stock!

Happy Valentine's Day! Or happy spend-some-quiet-time-with-a-book-or-comic day! We slipped a couple of romance-y themed treats into the library this morning. Young Romance from DC Comics is a revival from the days of yore and yesteryear, published just for the occasion. It's chock full 'o sweet superhero stories--including one with Superman and Wonder Woman--plus a few punch-out Valentines to woo your own cuddly caped crusader. (Too much?) It's recommended for hormonal teens and starry-eyed lovers.

We're also really excited to have a copy of New York Times bestselling novel A Discovery of Witches by Deborah Harkness. It's not your usual tawdry romance between a vampire and the witches who love them. It's much, much better than that! (Emily swears by it.) It's romantical, yet keeping with our Fantasy February theme. We know what you're thinking--that this is like that other notoriously cringe-worthy, vampires in love book series. Don't go there--this one really is well written. We're not judging. (But we do have standards!)

Stop by the Library of Justice and check 'em out!


Fantasy February continues! Now we're actually really proud that we found some fantasy comics for a variety of ages and tastes. (I apologize for the atrocious picture quality in some of these, BTW.)


For the all-ages set...
We've got Adventure Time, based on the mega-popular Cartoon Network show. 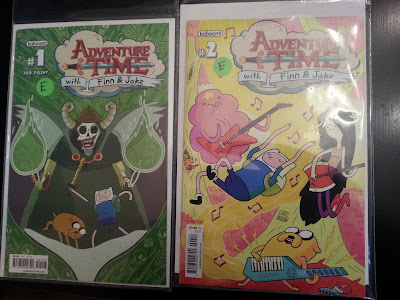 Follow Finn, Jake, Marceline and friends through the land of Ooo in thiese great all-ages comics from independent publisher Boom Studios. These comics are so popular that several of them have been reprinted three or more times already!


Tween, teen...
...and older fans of adventure comics are going to want to check out these fantastic Amethyst comics! I know what some of you are thinking: this is for girls, right?
Don't be fooled by the purple-bedazzled princess riding a flying horse. Amethyst: Princess of Gemworld is a well-written, action-packed fantasy series with some incredible line art. The story's heroine is Amy Winstead, a teenager who ends up transported to a magical realm where she inherits the power of her birthright: House Amethyst.

As you might imagine, each "house" in Gemworld is lorded over by a different noble under the banner of a different gemstone. It's got the world-building aspects of Game of Thrones* and the adolescent-to-womanhood empowerment of She-Ra Princess of Power.

In fact, Amethyst's first comic predates She-Ra's first TV appearance by more than two years! I'm not sure if the latter was influenced by the former, but there are some striking similarities. Magical realm and powers? Check! Rides a winged steed? Check! Uh, blonde? Check!

Amethyst's swashbuckling adventures also precede that other eponymous "warrior princess" Xena by more than a decade. Once you dive into the Gemworld series I think you'll really like what you read--which is not just a great story but one of the first resurgences of female superheroes in the 80s.

When Lynda Carter's Wonder Woman left the airwaves (along with Charlie's Angles, The Bionic Woman, et. al.) she left a gap in superhero pop culture for young girls to look up to. By the early 80s, Wonder Woman was undergoing a reboot of sorts, and the Amethyst character helped to reinforce the ranks of superheroines at the newsstand.

In any case, you don't need to read the anthology to enjoy the new comics--Sword of Sorcery: Amethyst--but the new books do have some references (which are explained) to the older source material--a nice homage for fans. She's also made an appearance in series of new, animated shorts on DC Nation. We've got the first five issues of SoSA in stock with more to come!


Finally for grown-ups...
If you're watching any of the new fairy-tale inspired TV shows (Once Upon a Time, Grim, etc.) you'll want to check out Fables, a collection of intertwining stories about storybook characters that live in the modern world--our world. Creator/writer Bill Willingham's intricately conceived world of exiled princes, princesses, monsters and villains has a decidedly noir feel to it.

We've got two complete stories that can be read as graphic novels (they're collected issues into trade paperback editions). These are for mature readers (I'd say 16+, but use your discretion).

In the Library of Justice:

*Without the adult themes of course!
Posted by Jay at 7:30 AM No comments:

Hey, didn't Punxsutawney Phil give us all a reprieve last weekend when he failed to spy his shadow? How is it that barely a week later we're getting reports of another big snowfall headed our way? Well this seems like the perfect opportunity to escape reality--so we're declaring it FANTASY FEBRUARY!

Earlier today we did a complete swap out of the Library of Justice and filled it with lots of fantasy books and comics--from ancient myths to modern fairy tales and everything in between. We've got a few more we'll drop in over the course of the month. 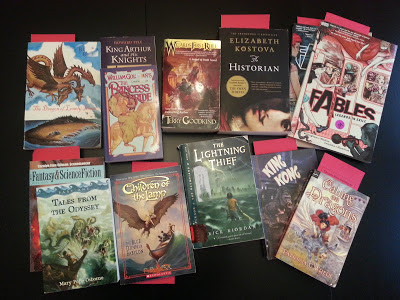 Princess Bride, Lightning Thief, King Arthur--there's plenty of classic stories to go around! One of Emily's favorites, The Historian, is also included for the more discerning reader. We've got even more fantasy comics for kids, tweens, and teens stocked as well--stay tuned for a separate post on those.

Finally, we have a request dear Library of Justice patrons: we want you to drop off a fantasy book you'd like to share in the library! We left some extra space this time around for donation, so if you've got something good, share it with your friends and neighbors.

Happy Fantasy February and good reading!
Posted by Jay at 5:24 PM No comments: