The thunderous Thor rolls into theaters this weekend and we have him at the Library of Justice! Just added today are a few rollicking tales of the mighty Asgardian's adventures. 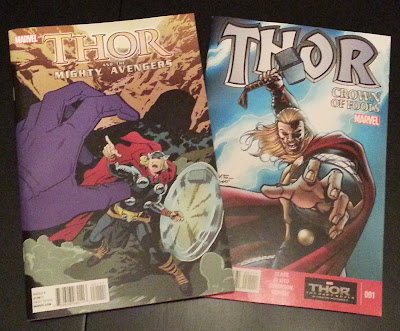 Thor and the Mighty Avengers is an excellent compilation of his team-ups on Earth with Iron Man, Namor, Ant-Man/Giant-Man, and Captain America! Writer Roger Landgridge and artist Chris Samnee turn in one of the most charming renditions of the character in ages. He's brash, brooding and full of heart. One of my personal favorites--pure fun!

Thor Crown of Fools is a single issue comic that begins a brand new adventure on Asgard battling the nefarious God of Mischief, himself: Loki. Thor finds himself at battling friends (the Lady Sif and the Warriors Three: Fandral, Hogan, and Volstagg) who've fallen under Loki's spell and seeking the help of an unlikely ally--a Frost Giant! 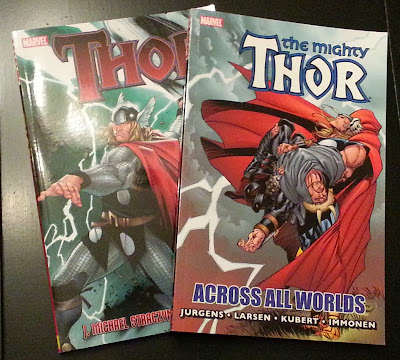 Want some background on Lord Malekith the Dark Elf, the villain from the new movie? Then check out his run-in with the God of Thunder in The Mighty Thor, Across All Worlds, where a plot to take over Asgard turns into a full-out war with the gods.

THOR (that's the whole title!) by famed sci-fi writer J. Michael Straczynski and artist Olivier Coipel is a trade paperback collection of the regular series where the war-weary Asgardian returns from the dead to team up with his Earthly alter ego, Dr. Donald Blake. It's a wonderful homage to the original Thor stories from the 60s.

Come by soon before Loki makes off with 'em!