Comic books: Just for kids...right?
Nope! And it hasn't been that way for--at least--the last four decades. There are comics for every age and interest you can think of.

On judging appropriateness for younger readers...

All modern, single-issue comic books have a rating, which appears right next to the UPC code. Most publishers employ their own ratings system, but generally you'll see things like "Everyone" or "Teen" or "Mature" for the main three levels. Of course, these are best-guesses for parents made by publishers.

TIP: When in doubt, have a look at the material yourself to see if you think it's appropriate for your kiddos. You know your kids best!

At-a-glance help...
When you visit the Library of Justice, you'll find a handy little cheat-sheet inside the door. It displays three stickers marked with the initials for the three levels that match stickers placed on the comics.

Please note that we're not attempting to rate these ourselves, but to call out ratings already listed. In some cases, there might not be a rating listed, and so it really is best guess. Again, feel free to open the book up and examine the content to judge for yourself. 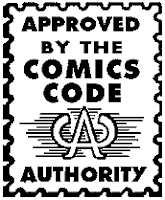 "Approved" with "Authority"
Comic books used to follow something called the Comics Code Authority (which has a lengthy history that I won't go into here), but that system was largely abandoned for the more flexible, multi-level system in place today. You may see it displayed on the cover of older comics (pre-2010s).

Anything with the Comics Code stamp will get an "E" sticker, but realize the stories may be more complex for younger readers. Which brings up a good opportunity to talk about...

The real issue--story.
Often times the bigger challenge in finding content suitable for kids is the same as for adults--finding a storyline that they'll find interesting. Appropriateness can mean selecting a story that will peak his or her interest. Starting out with a version of The Avengers for kids ages 5 and 6 might be better than some of the comics from the current era if, say, they wouldn't normally have the attention span to follow a graphic novel or trade paperback.

Typically, comics for younger readers are more focused on getting to know the characters and are a good introduction to reading in general. Then again, it can be fun to try something totally new!

Returning a sleeved comic to the Library of Justice?