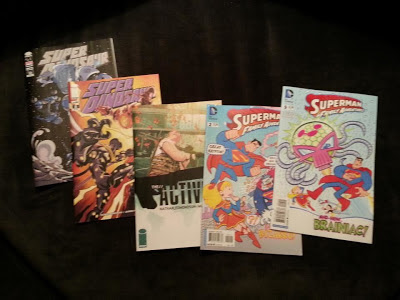 Wednesdays are very special for the curators of the Library of Justice. It means the possibility of fresh stock! For those not in the know, NEW comics arrive in stores every Wednesday.

Just like new movies on DVD hit shelves every Tuesday--and hit theaters every Friday--Wednesdays belong to comic books and graphic novels. And yes, it's technically after Wednesday, but try to ignore that for a sec, and focus on NEW COMICS!!


Comics for Kids...
Today we grabbed some new issues to refresh the Library, including two favorites with our younger patrons. Both are great titles for kids of all ages.

UP, UP, AND AWAY--FOR GOOD.
Superman battles a rogues gallery while aided by his closest pals (Lois, Supergirl, Superboy, and his dog Krypto in Superman Family Adventures. The art style is colorful, simple, and full of energy and excitement (and a few gags only parents could love). We were sad to learn recently that DC Comics is bringing the series to a close soon, so it was essential to scoop up some issues. We're still not sure why Supes is packin' up his cape for this kids-oriented title, but we suspect Lex Luthor is involved....

A BOY. AND HIS DINOSAUR. IN A SPACE SUIT.

Super Dinosaur is about a boy and his talking tyrannosaurus rex, Super Dinosaur (with a name like that, it's kind of setting him up for success, yes?). They square off against the evil Maximus, fight crime, go on adventures, you know, the usual. But the best part is the suit. SD might have quite the bite, but his reach isn't so great (he's got tiny arms). Yes, that totally does not sound "super". So they gave him a cool Iron-Man-like suit of armor complete with full-sized arms controlled by two teeny joysticks his widdo claws opewate so he can do AWESOME things like kung-fu! I told you he was SUPER.


Comics for Teens and Grown-ups...
Did you see Zero Dark Thirty and want to learn more about the black ops strike teams that are America's last defense against terrorists? Then get ready for some globe-trotting, high-tech excitement!

Foshay? FO'SHO!
Just out this week is an all new issue of The Activity, illustrated by local comic creator and artist Mitch Gerads. Team Omaha, a highly-trained and specialized, covert strike team are the stars, as they bring down terror cells around the globe. For this week's story, Mitch and writer Nathan Edmondson have the team taking out assassins in a familiar destination--Minneapolis! You may have seen the write-up in the Star Tribune about the issue this past weekend.

We also have a trade paperback of the first several issues in stock. Catch up with Team Omaha's missions and check out The Activity!

The WATCHMEN have arrived!

Finally, we have an excellent copy of what is likely the most-revered and well-known graphic novel of all time--WATCHMEN! Alan Moore and Dave Gibbons comic opus is not for the faint-of-heart or readers with low stamina. Every page packs in gripping drama in this modern noir tale filled with suspense and an ensemble of unforgettable characters.

If you saw the movie but never read the graphic novel you OWE it to yourself to read the much more nuanced and riveting source material. Seriously, WATCHMEN. Do I need to say more? Should I say it again? WATCHMEN.

The word has lost all meaning.