Space Gets Wild with Rocket Raccoon! 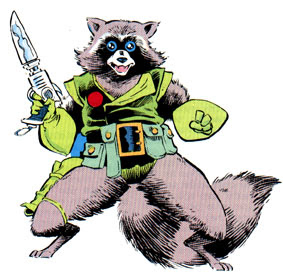 Landing at the library today to help celebrate SCI-tember: classic adventures of the furriest, swashbuckler in the cosmos--Rocket Raccoon! If you've not heard of him, you will soon--he's the best-known member of Marvel's Guardians of the Galaxy (think: Avengers in space!). A new movie in the works, due to hit theaters next year, will feature Bradley Cooper's voice in the role. Keep an eye on RR--you'll be seeing him everywhere come next summer!

Now's your chance to get caught up on the classic escapades from his title in the 80s that made him famous! We've even added an additional preview comic for the latest Guardians of the Galaxy series, as a primer for his new adventures as a member of that team.

Rocket was created by  Bill Mantlo and Keith Giffen. Mantlo wrote the character as a quick-witted, raygun-slinging hero that was quick with one-liners, but he also intended for the title to have a more meaningful message.

The Rocket Raccoon special issue has several stories and is appropriate for all ages. Guardians will likely appeal to older audiences (we've marked it "T" for teen, but your mileage may vary).

Be sure to stop by and check them out!