We've been closed for all of 48 hours and already things have been busy around here! First, we had a flurry of emails and messages, as well as neighbors stopping by--to talk about what happened the other day. I can't even put into words how amazing the response as been. Several folks have offered to donate more books and help restore trust. I can't go further with out saying a heartfelt "thank you" to you guys.

Then this afternoon, we received a call from Mr. Todd Bol, one of the founders of the Little Free Library organization who's offered to help clarify how the LFL concept works with some "Always a Gift, Never for Sale" signage and book stamps. He was not only generous but intensely motivated to help "get this fixed". He said something that really resonated, that he believed in the "genius of the community". Mr. Bol might have his way of defining that, but to me, it just means that the simple act of sharing serves to bind us together as a community. That's a pretty powerful idea.

Finally, we had some visitors at the Library today. Rather, the couple that had scooped up our books on Tuesday evening returned, and this time, they were putting books into the Library. We'd seen them, but didn't get outside in time to talk to them before they departed. None of the books are the same ones that were removed, but the point being they appeared to try to be making amends. 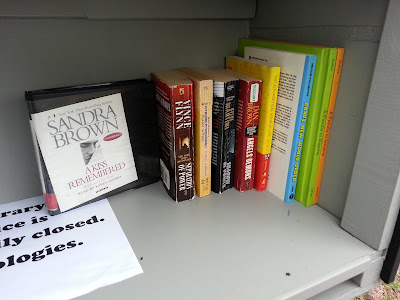 We'd put a sign in the Library notifying borrowers that it was closed for the time being, and still they added books to it, which of course makes me feel like we were wrong to close it. But we weren't sure at the time if we'd just be throwing even more books away at that point. So in a day full of heartwarming returns, this one was most welcome.

At this time, the Library is still closed, but we hope to reopen soon. We're hopeful that that our patrons (sharers and borrowers) will return with us.
Posted by Jay at 1:13 AM