Trouble at the Library of Justice

Saturday, May 4th was Free Comic Book Day and we couldn't have had more fun with friends and neighbors celebrating comics. We'd put about two dozen or so graphic novels out in the library for any passerbys, as well as some single issues in the secret shelf. The intent was to keep the celebration going through the weekend. Here's a pic of what was in there: 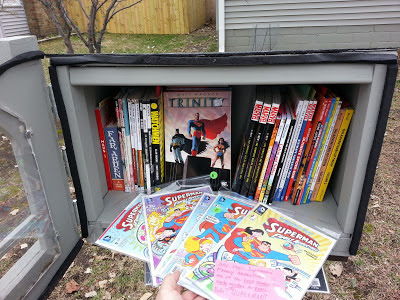 There's actually about six or seven books (X-men Apocalypse and Avengers Civil War) behind Trinity there, which I'd faced-front. There were a few more single comics under the Superman Family Adventures inserted in the comic shelf.

Holy hunger for literacy Batman!
I'd checked and all the books were still there on Monday morning--I'd even posted on Facebook that day that the books would get a change-over that evening. But we came home to a surprise that night:
﻿﻿
Nearly all the big graphic novels were gone! At first I was overjoyed that so many books had been borrowed. I imagined droves of new comic readers in our neighborhood, clamoring for comics!

And yet....neither of us could shake this mounting feeling that something didn't sit right. After all, we'd never had that many books vanish all at once before. At most, we see about a handful of books in and out of the library during the week (we're still relatively new in the neighborhood).

Time to restock...
So I'd gone back out Monday night with a fresh load of books to replenish our stock, choosing carefully to get a wide variety of titles and genres. We tend to throw in a few popular ones among those that not everyone may have heard of: 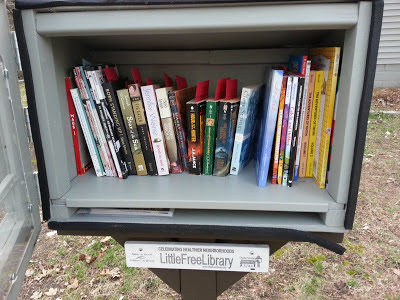 Then, something VERY strange. Emily had stumbled upon some folks we didn't recognize who were literally emptying the library by the armload. They'd pulled up in their car and took everything we had. She'd tried to find out from them if they actually intended reading them all--and that's when she saw our books in their front seat...with an open laptop perched atop the pile. When she inquired if they intended to read the book, they were short on answers. She tried to let them know this was more of a take-a-book/leave-a-book library. Her intention was to let them decide what was right. Their decision was to drive off with all the books in the library.

What's really going on here?
While we're not dummies, we really do try to give people the benefit of the doubt. But at some point you've got to believe what you've seen with your own eyes. We're wondering now, what's the deal with the laptop? It dawned on us that they could be using the Little Free Library Google Map listing to find all the LFLs in the area and just grab tons of books. Are they planning on scalping the books? Who knows. Most of the book stores in area won't take stamped books (ours usually are) but there are lots of other ways to sell them.

Now, there's nothing technically wrong with taking the books--I mean, c'mon that's why the library exists! And while it's not theft--at least in the strict "letter of the law" sense--it's still devastating. To empty the library (and we don't know for sure if it was the same people) TWO days in a row???

Curators, not just caretakers
Not exactly what we'd call the "spirit of community". So now our stock is down nearly 50 some-odd books. A stock that took us months to cultivate. I personally curated the graphic novels, spending a lot of time (and not exactly zero amount of money) to make sure we had titles that people might be interested in--trying to account for not just personal tastes, but the ages, and even the genders of kiddos in the neighborhood.

Again, we totally intended these books to be shared--even en mass since we just had a huge event for that purpose. But a few taking that many books with little (read: no) interest in reading them seems disingenuous. And our response probably shouldn't be to keep filling so that only a few can keep coming back to take everything. It's just really disheartening and a bummer.

Library on hiatus...
We want the library to be something that neighbors can use freely and openly, but also hope that borrowers will be sensible about the quantity they take at one time. More the point--we'd intended the library to be something in which we could share with our neighbors as we get to know them. We're grateful for the friendships and conversation it has already sparked!

It's heartbreaking to say this, but the Library of Justice is taking a break while we get our superhero mojo back and fine-tune things. We'll not be putting new books inside. There's currently a sign posted to indicate it's closed and not to be used. We hope this is temporary and that our friends in the neighborhood understand. Batman has his batcave and Superman his fortress of solitude to plan their comebacks. We hope this means there's a Library of Justice 2.0 in our future.

Thank you for your support everyone. We'll keep you posted.