From Books to Screen: Life of Pi 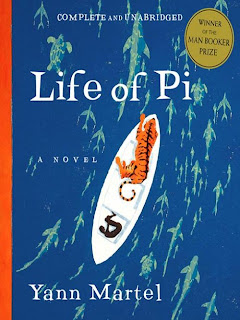 NOW! IN THEATERS! The Life of Pi, based on the book by Yann Martel, is the holiday season movie that everyone is talking about! Once thought to be "virtually unfilmable" the movie is now being lauded for the visually stunning manner in which it tells this dramatic tale. From the back cover:


Pi Patel, a God-loving boy and the son of a zookeeper, has a fervent love of stories and practices not only his native Hinduism, but also Christianity and Islam. When Pi is sixteen, his family and their zoo animals emigrate from India to North America aboard a Japanese cargo ship. Alas, the ship sinks--and Pi finds himself in a lifeboat, his only  companions a hyena, an orangutan, a wounded zebra, and a 450-pound Bengal tiger. Soon the tiger has dispatched all but Pi. Can Pi and the tiger find their way to land? Can Pi's fear, knowledge, and cunning keep him alive until they do?

This beloved story can now be enjoyed in your own imagination AND on the silver screen! Which do you think you'd enjoy more? Can movies ever really capture the essence of a book? Check out The Life of Pi from the Library of Justice and then make your way to the theater to see director Ang Lee's interpretation: