From Books to Screen: The Hobbit! 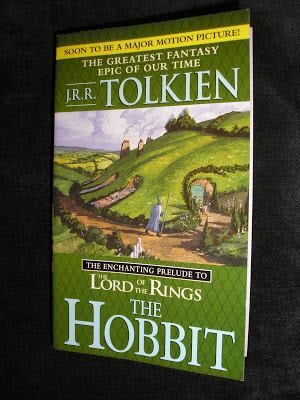 One of my favorite books, having read it in 5th grade: The Hobbit! This story features the exploits of Bilbo Baggins (Frodo's uncle) many years before the events in the Lord of the Rings. It's a bit more of a rollicking epic than the Rings books which were heavy both in plot and tone. J.R.R. Tolkien's first tale is much lighter affair, featuring a dozen or so dwarves with rhyming names, a bunch of nasty beasts to fight, and some old favorites like Gandalf the wizard and Gollum.

This tale of little folk on a grand adventure sends Bilbo, a hobbit of the Shire, reluctantly on an epic quest (as hired by his pal Gandalf) with a his dwarf companions. They're off to reclaim a treasure hoarded by the dragon Smaug beneath the bowels of the Misty Mountain.

Though there is only a single book for The Hobbit, director Peter Jackson has said there will be three films, which will include some additional material Tolkien had written afterwards. Here's the trailer for the first film set to premiere mid-December:

Now's the time to come pick up the story and see how it fares against Jackson's on-screen vision. If you hurry to the pick it up now, you could be "there and back again" before it hits theaters!

A brand new copy of The Hobbit is waiting for you in the Library of Justice!
Posted by Jay at 8:00 AM