From Books to Screen: Master And Commander! 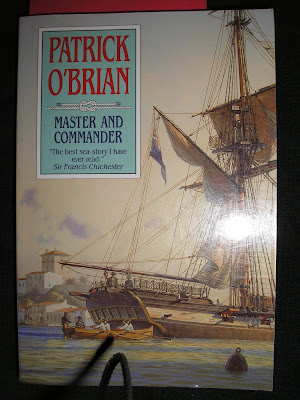 Starting today through the next few days we'll be featuring books that went on to make it big in Hollywood! We're kicking it off with Patrick O'Brian's Master And Commander, the first in a series of novels following the seafaring exploits of Captain Jack Aubrey of the British Navy. O'Brian's stories are known for their rigorous historical accuracy when it comes to crafting the 19th century. From the back cover:

This, the first in the splendid series of Jack Aubrey novels, establishes the friendship between Captain Aubrey, R. N., and Stephen Maturin, ships surgeon and intelligence agent, against the thrilling backdrop of the Napoleonic wars. Details of life aboard a man-of-war in Nelson's navy are faultlessly rendered: the conversational idiom of the officers in the ward room and the men on the lower deck, the food, the floggings, the mysteries of the wind and the rigging, and the roar of broadsides as the great ships close in battle.

The novel (and some of its sequels) later served as the basis for the film version staring Russel Crowe (which, incidentally, is one of my favorite movies!). Here's a look at the trailer:

So sail on over and check out the novel that started it all--Master And Commander is now available in the Library of Justice!
Posted by Jay at 8:00 AM